inDid some FlowFit today and I took it at a pretty good clip. One of the core principles is exhaling with force and inhaling normally. Just a few days into using a volumetric exerciser and I can already feel a difference. I was able to push through without feeling like I had to fight to maintain breathing patterns. Once I got into a rhythm, things pretty much carried themselves. 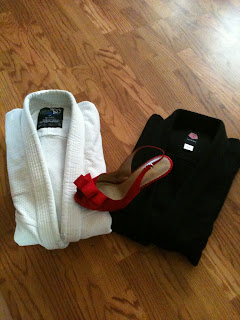 That's my new, black Fenom gi. They carry a woman's A4 (unicorn-class rarity) and I love the feel. Can't wait to try it out:) Why is there a shoe on it you ask? I just read a great article that SlideyFoot put up about the growth of women's BJJ in Texas (the little girls are adorable!). There's a section from a talk with Georgette that speaks volumes about the relationship of feminity and BJJ.


"Guys already usually think it’s (BJJ) cool, but women might not, until they see that other women are getting involved and enjoying it yet retaining their femininity."


My view on this might be a bit skewed because of my peer group and background, but women in the last two generations or so seem to have traded off the role model of Donna Reed for that of Wonder Woman. It sounds great on the surface...but when you think about it, Diana's a character that's powerful, independent, and is 100% sexy 100% of the time. Now, I love Wonder Woman. She and Batman were my favorite super heroes growing up, but you translate that expectation of maintaining certain standards of physical attractiveness at all times and you're left with a pretty hefty burden. One that's akin to rolling with heels on. Sure, it can be done, and yeah, it looks better than bare feet and jammed toes, but what is it really accomplishing?


To see an example of how this flows (especially in the minds of BJJ men), all you have to do do is stop by a forum thread on women in BJJ and it's likely to degrade into a collection of pictures like these within five posts. I don't even have an issue with them unto themselves. Some are really cute, but I think BJJ affords women and girls the opportunity to spend some time with the same lack of concern for physical appearance that men enjoy so much more frequently than we do, even if we do decide to re-fancy ourselves once we're off the mats.


It may seem like something small, but spending time being nothing but your raw, applied, physical self is something everyone should experience.

my new years resolution is to give myself cute days o remind myself that although i'm "one of the guys" i don't have to look like "one of the guys". it felt good to be hot, with painted lips, and to show off my bjj sculpted body at a recent mma event. it's funny bc many of the ppl outside of the gym think either i don't train, or i have to be butch to even consider it. shame shame. i love that article by the way, i think the little girls kicking ass are adorable.

Haha, very true! Half the time, I come off the mat looking like I've just been dragged around by my hair for the last five minutes (which is some cases is close to the truth!). I love the Fenom gi, btw. Very soft!

@Shakia...I have to do that myself. Between training BJJ, having been going to school online and working in a small office, cute days tend to be few and far between...though I keep buying the shoes...

@A.D. ...It is crazy soft. It almost feels like regular clothing...AND it's long enough for me!

It's such a hard box to be in... so many contradictory expectations at once! As women, we're supposed to be beautiful, soft, sexy, sexual, feminine, slender, effortless, graceful and yet, to be respected in the sport, I think we also have to be un-made up, un-frilly, un-done, hard, muscular, effortful, serious, asexual, resilient, low-maintenance and definitely "one of the guys."

I don't mind the off-color jokes and honestly they're the kinds of jokes I made before I got into jits... I don't mind seeing boys in their underwear, or having my hair look like I was pulled backwards through a hedge, or 99% of the rest of the damage to my external beauty.

But I really do mind the damage to my pedicure! I used to get one every other week! I had such pretty polished toes! And now... sigh... grappler's pedicure! (The half-moon shape bare patch on the tip of each big toe, where the polish wears away first..)

BTW Megan those shoes are HOT! :) Love the red satin bow and peeptoe!

I love this post! Spending time with my "raw, applied, physical self" is EXACTLY what I love about BJJ, but I never could put it into words. It's something I never knew how to do before I started training. I have gotten into the completely-applied, not-thinking-about-anything-else zone before, but never with my physical self.

Yep--by far the two most popular posts of mine are: Cauliflower ear, and BJJ & Femininity. Seriously--like more than 3x as many views.

Though the cauli ear brings in more random people. I get some WEIRD search terms, like this:
"do woman mixed martial artists wear thongs"

I think when I joined I had a bit of a kneejerk reaction. I had culture shock. I wasn't used to having swamp hair, to sweating, or to doing anything that made me stink afterward. I'm in education! I sit at a desk or stand in front of a classroom.

So for me it was a challenge. I didn't like looking like what the cat dragged in, ESPECIALLY after having been in Ukraine for two years, a country where you don't walk to the store to buy a roll of toilet paper without putting makeup on.

Now--I love it and even if I look like crap I don't care. However, I do FREAKING LOVE PEDICURES and it's hard to justify spending $30 on something that will look like crap after I get on the mats. Sigh.

But yeah--I don't mind the bruises and the occasional black eyes.

Sneak preview: there's now a women's only class in Korea. The first! I'm going to write about it this weekend :) STAY TUNED!

Some very interesting points. I think BJJ helps to reduce gender bias because it is, as they say, the universal equalizer. I can see how you would enjoy not having to look cute at practice, lord knows I don't gel my hair or shave before rolling. But more and more people are bringing fashion into the equation. Companies like SYR and newazaappearal are out to make it seem like a fashion contest. It's no wonder that some girls feel obliged to represent their style OTM as well. But you're right: it shouldn't be about that.

Thanks TRESO...I think as long as the concept of "looking good" stays on the gi, we're in safe territory. No hair gelling...lol.