Take pretty much any intro to marketing class, and you'll run into humorous lists like this one, offering entertaining cultural missteps like Nova being marketed to Spanish speaking audiences where the name translates to "Does not go." A few have been proven to be urban legends, but the lesson still stands...before you go appropriating, or selling to another culture, thumbing through a Frommer's isn't going to cut it. You need insight from someone (and possibly multiple someones) intimately familiar with not only culture, but history and nuance. 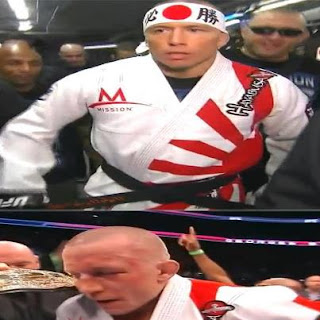 It may amount to nothing, but Hayabusa seems to have made one of these missteps a while back. Earlier today, fellow fighter, Chan Sung Jung, "The Korean Zombie", posted this on his Facebook in reaction GSP wearing the Japanese-themed gi.

Hi, My name is Chan Sung Jung from South Korea. As one of many Koreans who like you as an incredible athlete, I feel like I should tell you that many Korean fans, including myself, were shocked to see you in your gi designed after the Japanese 'Rising Sun Flag'. For Asians, this flag is a symbol of war crimes, much like the German Hakenkreuzflagge. Did you know that? I hope not.

Just like Nazis, the Japanese also committed atrocities under the name of 'Militarism'. You can easily learn what they've done by googling (please do), although it's only the tiny tip of an enormous iceberg.


Furthermore, the Japanese Government never gave a sincere apology, and still to this day, so many victims are dying in pain, heartbroken, without being compensated. But many westerners like to wear clothes designed after the symbol under which so many war crimes and so much tragedy happened, which is ridiculous.

I know most of them are not militarists. I know most of them do not approve unjustified invasion, torture, massacre, etc. They're just ignorant. It's such a shame that many westerners are not aware of this tragic fact. Wearing Rising Sun outfits is as bad as wearing clothes with the Nazi mark on it, if not worse.

Since you're influenced by Japanese Martial Arts, your wearing a headband designed after Japanese flag is understandable. But again, that huge 'Rising Sun' on your Gi means something else.

Many people say GSP is the best Welterweight fighter throughout history, to which I totally agree. This means you have a great influence on every single fan of yours all around the world. And I do believe your wearing 'the symbol of War Crime' is a very bad example for them, not to mention for yourself.

So, what do you reckon?
Do you want to wear the same Gi next time as well? "


I consider myself to be decently culturally sensitive and aware...still...even with my knowledge of the Imperial  version of Japan's flag, the implications of this gi completely eluded  me, even with my posting on it on GiFreak, even having visited one of areas in Japan most famous for "comfort women" (mostly Chinese and Korean sex slaves), even having taken this picture at a Hong Kong memorial to the Chinese that died in both World Wars.


It's estimated that over 6 million Chinese, Koreans, Filipinos and Indonesians were killed by Japanese forces during WWII alone. Considering their history (one that is seldom taught to those of us in the West), it's no surprise that a symbol like the Kyokujitsu-ki is not exactly a neutral image.

I understand why Hayabusa used it...I don't even necessarily think they (or GSP) were being intentionally insensitive. That said, as Chan pointed out, it's not like Hayabusa would have had to fly to Asia to find out why it could have been a problem...a light Googling or trip to Wikipedia really does reveal the controversial nature of the image, almost immediately. I very much believe that if you're going to benefit financially from a global market, you have to take the difficulties along with the advantages.

I'm curious to see how the company and the fighter handle the issue, especially considering they were called out by such a high profile name.