So I'm finally writing a review of the zentai (more commonly known as a "catsuit") hood that I started using to protect my hair last year. Hair in jiu jitsu can be a serious liability...I still don't get how people with really long hair roll with it free. I just saw this great video of Leticia Ribeiro and I found myself watching that braid flopping around, waiting for it to get tangled or caught in something.

Anyway...the zentai hood. I'd gone hunting trying to find something that would protect my hair but wasn't as bulky as a wrestling slicker. A friend at work found this site. I purchased two to switch up just in case I ever forgot one in the recesses of my gym bag and it missed washing. 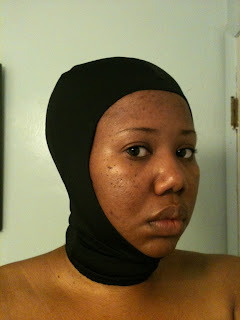 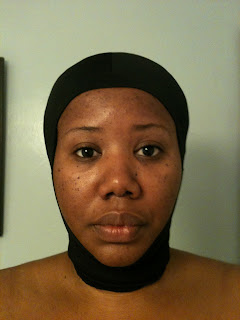 Ordering: The site (www.milanoo.com) is simple to use with a bundle of payment options, including PayPal...pretty standard for any company out of China that ships to an international market. They even have a handy-dandy currency converter that can be used while you shop. Shipping was what some would consider slow, as it took about 3 weeks to get it, but that does happen if you're ordering internationally. Shipping came in around $10.

Wear: Decently comfortable. Like the review on the website says, the neck is a little tight, but I've gotten used to it. It's made of spandex, so it's not bulky and fits snugly. I've noticed that during sparring, it does tend to slip back some and even completely off on some occasions, but 90% of the time, it stays where it needs to. Between rounds, I pull the top behind my head and just pull it back forward when I'm ready to train again.

Construction: The stitching is solid and one has just now started to have a little string come loose, but it's far from serious. It's made of six separate panels and zips up in the back. I was worried at first at grappling with a zipper (it's only about 3/4" long) but no problems yet. 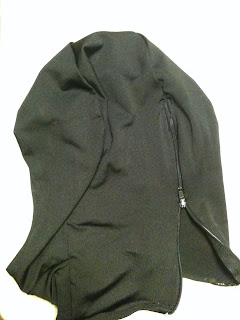 Wash: It gets just as funky as any shirt/rashguard would. I just toss it in to wash with my gi and dry on delicate. No problems or deformities so far.

Effectiveness: Just got my highlights redone today and had to ask my stylist. She said my hair's light years better than it was after my first year of training. I've actually been able to grow it out while training, which I thought would have been impossible.

Overall: I doubt it's very effective in preventing cauliflower ear--I'm not really prone to it so it might not be doing anything at all. I definitely recommend it though if you're looking to save your hair or receive lots of ninja related compliments and cracks.

Labels: Getting off the Ground, Lady Stuffs

Convent Jitsu! I might actually try this. My poor mousy hair suffers terribly.

Cool - do you happen to know if this is available outside of the US? Not that I have long hair, but several women have asked me about protecting their hair in the past. I normally recommend a headguard, but this looks better.

Vulkan also makes a great hair cap, it is a lyrca cap that ties under the chin. It isn't on the website but if you call/email them you can order it: http://www.vulkanstore.com/

I also used water polo headgear, but I found the ear cups can move and hurt when they dig in across your ear...

They look really ugly but are the way to go, if you train hard with long hair... The hair caps prevent your hair getting ripped and damaged.

I'm ashamed at not having specified how this works internationally. I think I always assume the whole planet ships everywhere...they do actually ship around the globe.

That's really interesting@Melissa. I would think they'd put it on the site just to advertise everything they had. I would have bought that before even looking for this since I'm a customer of Vulkan. I've gotten a couple of water polo suggestions too, but I just don't like the feel of too-too much gear on. Thanks for the info!

Hi! I found your blog through this entry via another blog post of female BJJ practitioners, or maybe reddit, and I had to leave a comment of appreciation. Yours was the first bjj blog of which I read multiple pages... Perhaps because you are also a foodie and a salsera! Much respect and thanks for writing.

Latest response ever, but Hi V, and thanks for reading! It's always cool to run across another salsera/foodie/jiujitsuka out there:)