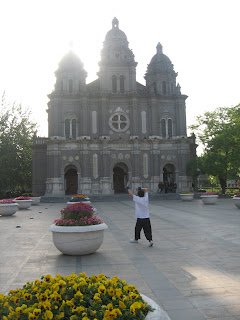 I chose this picture I took of a guy doing tai chi in front of a cathedral near WangFuJing in BeiJing. It's a pretty martial art being done in a pretty place on a pretty day(my photography skills do justice to neither).
But yeah...I just left a meeting with an organization I'm in that tries to further non-political ties between the US and China. I brought up the idea of having a martial arts show since, besides the food, that's one of the biggest Chinese things with which Americans, and probably anyone in the world is most familiar. Well, a couple people know I do martial arts and of course, the first question is "Why don't you show us some of what you do?" This is at least the second time I've been asked to do a demonstration. I explained that BJJ is Brazilian/Japanese in origin (doesn't seem to make a difference), doesn't have forms (I don't think most people know what forms/kata really are in a martial art) and in general, just isn't pretty (blank stares). That's been enough to shut down questions, though I do think most people just think I'm being shy/difficult.
I kind of like that. I'm a pretty utilitarian girl  (INTJ and all...always asking "does it work?") and while I do have an appreciation for visual aesthetics, it kind of makes me proud that my art is so bare bones. I won't say it's ugly. I think it's beautiful...but it's definitely not pretty.
I'm also super happy that my head coach just won his most recent fight. Super sad that I couldn't go because of work. The mood in the gym the next day was this wonderful mix of happiness, pride, focus all underlined with the ever-present BJJ calmness. Yay-TT!

Pretty? No. You are right.

BJJ is electrifying and edgy.

It doesn't need to be pretty to be FREAKING AWESOME! lol Love that picture.

BJJ is not pretty, and it scares the crap out of people when you use them to demonstrate. Which reminds me - I have a sure-fire way to get people to stop asking you to demonstrate BJJ. Next time someone asks, get a volunteer and give a demonstration, starting with a takedown, then showing various chokes and keylocks. Cause a little pain. Guaranteed that after they see someone squirming in pain and gasping for breath, no one else will ask you to show them. :) And if they are still interested after that, you can probably recruit them to your gym!