Thought patterns tripping me up

So that basic butterfly sweep I was having issues with. I was just cleaning out my email and found a GrappleArts Newsletter devoted to that very topic. Yays:) Turns out I was getting stalled (and frustrated) during the hip switch because it just felt insanely difficult. I drilled it a few times in class and decided I wasn't strong enough and needed to go home and work on some shoulder bridging to get stronger. 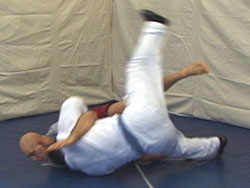 It just hit me though, that considering how long I've been doing this, my build and the principles behind the art, "not strong enough" is seldom going to be the issue. (The actual issue was, as it turns out, that I was trying to brace all my weight on my head/shoulder and not putting any on my inside leg).

There are still all these weird little bits of insecurities I have left over from when I first started. These are the big ones I've noticed (and why I logically know they're not true).


What I've noticed is usually going on is that...
I can't really hold them against myself. I'm working against a couple of decades of ignorance of physical activity. What I can do though, is be aware of them when they crop up and learn how to work past them.

It's funny but when I think about it, I have the same hangups as you... especially #1 and 2. #3 is true for me too, though less from a size perspective-- it's more like I don't want to be the spazzy whitebelt/bluebelt who hurts someone. The fear of being a spaz curtails my ability to combat #2, because I don't hardly ever put enough "umph" into it.... Good post!

It's good and scary to hear someone farther down the path that has the same problem. I think they're going to be with me for a while...maybe forever.

#3 especially, I'm always trying to overcome. Last time I was working butterfly sweeps, I told myself I was going to be more aggressive so I could get a feel for the move as a whole. First time out of the blocks I scoot in to get the underhook and the white belt I was working with lets out a "Holy s!@#$!". I dialed back after that.