So I got my blue belt today...

I am way more excited than I expected. We had the belt ceremony this afternoon and I sat back and realized how few people get to accomplish things they genuinely never thought they could do.

The night before, at KickboxerInstructor and WrestlerInstructor's tests (brown and black respectively), I was talking with one of the blues that had just gone to purple about preserving your belts. I like to keep the ones that are presented to me and buy new ones for training. Eventually I'd like to frame them all in one display case. We talked about the idea and he insisted I needed to exclude the white since it isn't earned or presented. I explained that that belt was incredibly difficult for me and that walking in that door the second time ready to run was one of the most difficult things I'd ever done. Possibly even more difficult than earning blue. 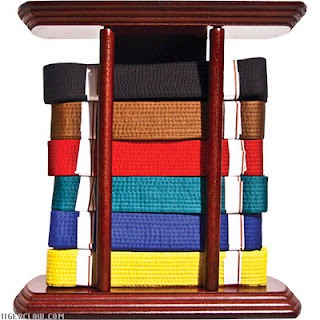 Anyway, I'm sure I'll go through all the feelings of inadequacy and confusion that are typical for new blues (though I think having been a green has buffered that some). I think though, a big help will be this definition of a blue belt that I found on BJJ Weekly. It's my favorite so far...


"A blue belt in Brazilian Jiu-Jitsu really means that you are a serious student of the art. Nothing more, nothing less. When I see a blue belt I know that is someone who has put in a significant amount of time and effort towards improving their game. It doesn't really say anything about their ability to fight, or how many moves they know. It simply means that they are a serious student." 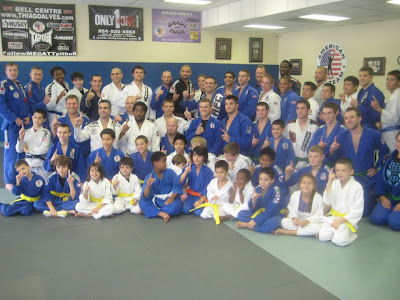 Since I survived, I want to try something different going forward. I was sitting next to Wrestler instructor at lunch after the ceremony (he'd just gotten his black belt...amazing thing to see) and told him I wanted to start weight training. Up until now, I've just wanted to survive. Now I want to optimize.
Posted by Megan at 8:30 PM

I'm with you on the white belt being worthy of display. White belts aren't earned, but it can still involve many tests of courage, heart, patience, and resilience. I know mine has.

Congrats!!! And I love your take on the white belt... I also struggled in signing up. Was just a hair away from a panic.attack, when I signed up. ;)

Thanks guys! I really feel like it's a "restart" in training.

And I love that definition of a blue belt.

Congratulations. It's totally normal to sleep with it.

Hi, congrats on getting your blue belt :) i was wondering though, what the wooden display cabinet in your photo is called? I'm in Australia and my friend and fellow bjj enthusist just got his blue too. It'd make for an awesome present for him for xmas coming up and to celebrate his achievement. Thanks :)

Fantastic news Megan. Many congrats and I completely agree with Dagney about sleeping with the belt on!

LOL@sleeping with it...might try that tonight:)

Anon-throw "martial arts belt display" into Google and you'll see a ton of them in a bunch of different styles.

Congratulations! You have worked hard for it, whatever definition you choose to give blue belt.

My instructor just said that the guy who started a few months before me was up for blue belt testing soon. Gave me shivers. I'd like to keep my white belt for a few more years, please.

Congrats on getting blue!!

Way to go Megan!!! AND I loved your comment about weightlifting and wanting to "optimize."

Congrats!! Well deserved, I'm sure! If you ever happen to wander over to NYC, let me know, I would love to roll with (ie. get a beatdown from) you :o)

Wow sorry I totally missed this thread. Congratulations!!!! Much deserved and earned!!!!