The Year of the Triangle

I've dubbed 2012 the year of the triangle. I've heard multiple times from KickboxerInstructor that I should be fantabulous (my word, not his) with this submission and I plan to make that real in 2012. I don't want to call it a "resolution", so I'm just going to say that, having been promoted to blue belt, I'm more comfortable sitting back and planning what I want to learn and improve. I basically want to be able to threaten a triangle from anywhere. 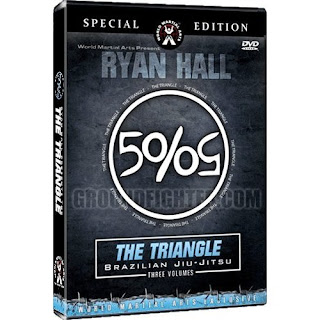 SO...first step. Information. I bought Ryan Hall's "The Triangle" because it's the first thing that comes out of anybody's mouth when you say you want better triangles, but honestly mostly because he takes a conceptual approach to the position, teaching it as both a submission and a type of guard simultaneously. I'm particularly enamored with disc 2: Angles, Mechanics and Entries. Why? Because I only catch elementary and accidental triangles. I can't impose one on anybody save very new white belts from mount.

I'm quite happy to say that first time on the mats and I'm seeing results. Mostly in rethinking head control and  the base requirements for finishing, but the really big "a-ha" came for my mounted triangles. I've been setting them up from mount and finishing from guard after rolling over (lots of chances to lose them there) but I learned in one lesson, how to finish from mount and it really works. Before, I couldn't even pull it off when just working technique.

The other thing I've pulled from it is his hip shooting drill. Dude is CRAZY fast with his hips...something I'm definitely not...something you definitely need to be when using triangles. He's so fast his legs like bird wings flapping. I tried it once (it involves holding a regular hip shoot and switching back and forth between left and right locks) and came crashing down to the floor. My hips are HEAVY...and not just from the 10lbs I've picked up over the last two months. Anatomically, women just have more weight distributed down there and my hips are quite Black, so it's going to take a bit to be able to move them.

I'll definitely be spending some quality time with this one.

LOL at your hips being Black :) This makes me interested in watching my copy of the instructional... thanks :) And happy New Year!

It's a good one. I feel like It's going to be this one and Kesting's Bigger Stronger DVD for a good chunk of the year.