I expected to be over it by now.

Jiu jitsu can do amazing things for the body image of a woman who hasn't dealt much with the physicality of her body during her life. I've fully accepted being heavier than all but one or two of the guys at the gym. I've come to take pride in the usefulness of my long legs when it comes to spider guard and triangles. I don't shy away from applying my full weight in knee on belly anymore...but there's still something there and I thought those cobwebs would have been swept clean by now by an arsenal of amazing sweeps. (my sweeps suck btw) 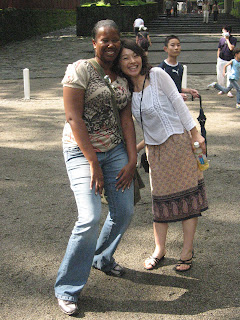 That photo? That's from my last trip to Japan. Upon meeting me (having already known my even larger brother), the lady in the picture remarked "We...we are Hobbits!" apparently now being left with the impression that American women normally come in Amazonian proportions. Just last weekend, at the seminar with Sofia Amarante, she remarked at how small I made her feel, which didn't surprise me and I honestly found it funny. Afterward though, it made me think...this is a woman who trains with the massive Roberto Abreu...he's not that much larger than me, so I would have assumed she'd be used to feeling tiny. But that made me realize that there is a genuine difference between being a large woman and being a large man that extends beyond the hard facts of height and weight. Basically, I present as bigger than a man of my same height and weight just because I'm female.

As an aside, I find the need to differentiate "Big girl syndrome" from "Fat girl syndrome"...the terms seem to be used interchangeably, but I've gone through periods in my life where, yes, I've felt and been technically overweight, but there are also periods where I've been asked to and if I modeled, so I can't rightly or fully claim that. Perhaps a better title is "Amazon Syndrome", because regardless of weight, I am large, and every now and then, I'm reminded of my little abnormality.

This past Friday, locked in the guard of a new green belt, holding off his muscling, the feelings inched their way in...always being taller than all the boys in class, being referred to as "big man" by a guy in gym class. I sat in his full guard, watching him struggle and muscle and fatigue himself until I freed a leg and passed to half. I bore my weight down with no shame, no sensitivity and watched him push with very little success. There lies one of the struggles of the blue belt...as a white and green, I would always wonder if the guys were being nice and simply letting me settle my weight and hold them down. This time though, I could see clearly in his face that he was trying his hardest and my weight was simply too much to move. I went back and forth in my head, wondering if I should play "little man" as to not further my reliance on my size when it comes to passing...what would Gabi Garcia do?...after all, I'm still pretty helpless against the bigger purples...but then my ego kicked in, I decided I wasn't going to let a lower belt dominate me, and dropped a little more shoulder pressure and tried a new half guard pass Parrumpa had taught us just before the belt exam.

I have found little peace on the mats in my odd mix of size, strength and gender...feeling like a behemoth one roll and a rag-doll the next. I am still that un-girl that the boys feel less shame in being partnered with but am relatively easily muscled into an Americana (the pushups have helped a bit). I genuinely thought that, by blue, I would have mounds of clarity. While I am much better at understanding and using pressure instead of weight and controlling the momentum of my own mass, I still feel quite confused in the sea of my own size.

Gabi Garcia would probably use her size and strength to advantage without giving it a second thought, but I am not impressed by her technical skill. I think to achieve your goals, you would do better to use the big men focused on beating Roger Gracie as models for your technique: Andre Galvao, Romulo Barral, and their peers. Just my thought. All the best.

Thanks...funny though, I look at Galvao and I see a "medium guy". I'm between the two but closer in size to Roger.

Had a good roll with a heavy purple tonight though. I think it's going to come down to continuing to work on having a game that's adjustable.

I think you are spot on about girls being perceived as larger than men their same size solely because they are women.

I get a lot of comments about my size, and I am only 5'9... shorter than at least half of the guys I train with. Yet, at least once a class I hear something about being long/tall/big. I can't imagine that I actually feel big compared to half my team, but someone sits down to grapple a girl, I think they expect me to feel smaller then a dude, and when I don't it weirds them out.

Isn't Jiu jitsu beautiful? It's an amazing method to transform the way we get in touch with our body, our reality, the world!

Enjoy the ride. If sometimes you want to use your body, strength, technique, height...etc. do so.

If sometimes you want to switch everything else down and focus on just using "pure" technique (whatever the hell that is!) then do so too.

The key lies in two things:

2. be aware that you are doing what you are doing. The Buddha doesn't judge the reality and thoughts he observes, but he is very aware of them and the feelings they generate in him.

Personally, I love my weight. I feel that BJJ is about leverage and the first thing I learnt about leverage in school is that a lever is a multiplier of force and effect. What is force in this case:

That's kinda it. If you are using the art of leverage then you are using force. Simple as. Leverage is simply the BEST method to use your weight/size/strength...etc.

However, I know that I used to hide behind that scientific fact and use a little too much strength/size...etc. All that lessened (I hope!) when I started focusing on simply being honest and aware of what I'm doing, how it feels and why I'm doing it (experiment, ego, fear..e.tc.)

I love your honesty and look forward to hearing more :)

Your comments on the Americana are right on and a constant frustration on my end; males our size will be stronger PERIOD! Regardless, I have recommitted myself to some serious strength training, particularly upper body.

Question for you, though: several ladies have joined the gym since I started, however, they prefer not to partner with me (perhaps they have mistaken my Amazonian build for the presence of a Y chromosome?). Engage it ignore?

Liam...yeah...I think I just need to start choosing from the beginning what I'm going to work with and not leaving it up to my emotions mid-roll. I've done it before, but the ego issues of a first roll with a lower belt threw me.

Hi Anonymous! Where are you and what school? Love the patch idea...but yeah, I did have a run-in early on when one of the smaller girls said straight up she didn't like rolling with me because I'm "scary". I posted on it once before here http://bjiujitsu.blogspot.com/search?q=scare And honestly, I'm really not aggressive and definitely don't use my full weight against smaller women and girls.

It happens with most of the women except the bravest of the small. Some tend to give up, others outright mention the size issue. I usually make sure to let them know straight up that they can submit me (that's what jiu jitsu's all about after all), and that I'm a good way to get used to rolling with the bigger guys.

So yeah, I say definitely engage. They're not doing anyone any favors by limiting their size exposure. If they're prepping for a competition, sure, I get it, but just rolling day to day, it's good to get used to other sizes and builds.

A gal I know at Alliance Atlanta, who is a professional body builder (5'5", 195 lbs and something like 14% body fat, with 24" quads if I recall correctly?) struggled with the same issues. In time you will come to understand that those girls are limiting themselves, not you. The same way that a guy who won't partner up with you is limiting himself. And, in turn, when we choose not to roll with certain people, we limit ourselves (out of safety or sanity, and that's just fine!)

I'm 5'2" varying in weight between leve and meio-pesado. I'd love to roll with you ladies anytime. I train at Gracie Humaita Austin and would love to host you for a visit :)

A friend just forwarded this link to me after I posted about feeling like a "bus in reverse." I am not Amoazonian, I am actually fat. Combine that with living in Japan, surrounded by "hobbits" and I feel like the monster that swallowed Godzilla.

I'm working to change my size. And I hope to some day change my image.