I've reached a point in life where I'm over the olfactory onslaught that defines the world of women's products...I don't want mountain fresh, forest rain, lavender avalanche or peach apocalypse anything. I put a decent amount of money into my perfumes and that's all I want to smell like...so a few years back, I started a quest for unscented products. That lead me deeper into the world of natural products and started me on a mission to minimize polluting the environment and torturing my own liver (anything you rub into your skin eventually gets processed by your body...think of that next time you're putting on bug repellent).

So I've switched to Dr. Bronner's soap, organic hair products and natural oils for moisturizers...still though...there was the choking scent of the laundry--the detergent, the softener, the bleach--they all got me wondering not only what I was inhaling, but what my skin was being swaddled in literally day in and day out.

If I were a normal person who just wore clothes to work and came home, the hunt for friendlier laundry products wouldn't have been bad...but oh how BJJ changes things. So I went hunting around and ran across Charlie's Soap. Apparently it "cleans everything from false teeth to diesel engines". I...have neither of those so I will only be talking about its effect on my gis. I'll be comparing it against my previous favorite, Tide with Febreeze. 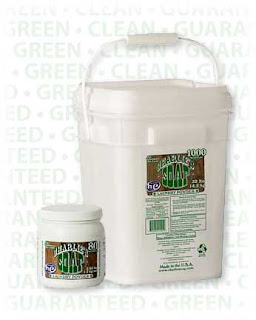 Cost- At $.13 per load (free shipping on Amazon), it squarely beats out Tide on cost, which comes in at $.20 per load. For both, I tend to toss in a bit more for jiu jitsu washes (you're not really supposed to with Charlie's), but you can definitely get by with the approximate tablespoon that the included green scooper handily measures for you. If you're really in love and want to go for the 1000 load, you'll get the price down to $.10 per washer run.

Scent-possibly my favorite part of the product. It smells like CLEAN and has left my gis smelling like...almost nothing really. While I do love a breath of laundry freshness while rolling with someone (nice assurance that the gi's actually been...ya know...washed), I know that people have allergies and, as with makeup and cologne, neutral is best.

Appearance-It's a fine, white powder. Not fin enough to be carried in the air, but not rocky/pebbly either. That's about it.

Effectiveness-Before I bought any, I ran to Amazon's reviews and found a story of a woman who now swears by Charlie's to wash her sanitation worker husband's grease and ick-stained uniforms. While I don't have any info on the grease removal, I give the soap a thumbs up for getting out sweat, funk, stank, grime and whatever else I pick up on the mats. No tests with blood yet, but we'll see. It also, as it claims, has removed the residue from the drum of my machine. Nice little added bonus there.

So yes...I like Charlie's so much that it's become my laundry standard, even for non-gym clothes. I really might pick up the ginormous tub. Also, if you have hard water (like the rocks we wash our clothes and hair with down here in Florida), their hard water treatment is a great substitute for fabric softener. Same deal...one little green scoop full and you're good to go. They've even gotten me exploring their line of cleaning products, with which I'm also very pleased. The "green" lines I've found in supermarkets either choked me with fumes, smelled too much like an herb garden (thyme? Thanks Martha Stewart.) or just didn't work. Charlie's has to soak, but it cleans really well. I might have to go hunting for a diesel engine or two to test out.

I'd be really interested in hearing how you feel about this detergent 3-6 months from now.

My wife feels the same way you do about the heavy scents used in detergent. Some are just cloying to the point of nausea. Her search has lead her to Udderly Fresh Soaps, but I'm not sold on it quite yet. It doesnt seem to ward off the "funk" in my BJJ gear as well as the commercial stuff.

I've been using Charlie's on my husband's gis for a few years now. Every once in a while I need to put a little bit of Borax or vinegar in the load to really get the stink out, but Charlie's has been the ONLY thing that keeps the funk at bay.

After 2 years and one ginormous tub of Charlies, I'm a still a huge fan. My husband is a landscaper and Charlies gets rid of the funk of rotting leaves and decaying mulch just fine.

I'll second what Tara said. I toss in a bit of vinegar occasionally (which I did anyway) and they seem to be doing ok. I should probably ask my training partners though.