I'm gonna plaigiarize myself a bit for this post...

Perhaps the most surprising thing about jiu jitsu to me is the fact that I like the teenagers. Genuinely like them. They're like...in my phone and...on my Facebook...and I'm actually cool with it.


My younger brother came to visit two weeks ago and afterward told me that his first reaction was "Is that my sister talking to kids? Really?" My mother told me years ago that she'd hoped, when my brother was born three years after me, that he'd teach me how to play. Youth...other than not being old...I've never taken that much enjoyment from it. As a child I never understood the energy and exuberance of other children. They seemed irrational and all too eager to spend their time on things that made very little sense to me. Oddly, I enjoyed my childhood...though I think it was more of a really long, pre-adulthood.


Well, a few nights ago, I was drilling armbars with one of the boys and he asked how I was doing. I told him work had been crazy and I was drained. He replied that he wasn't looking forward to that stage of life. I revealed to him that I enjoyed being an adult...being a kid was cool, but that I definitely wouldn't go back. He paused briefly on his right hip, looking at me. "Really?" "...yeah." 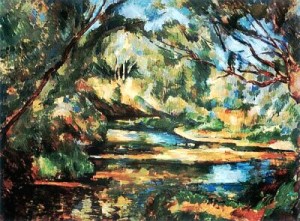 This exchange made me think of something I'd read about the painter Cezanne and so-called "late bloomers".
The article examines fertile periods in a few artists’ lives, contrasting those that met with success while young and those that didn't see fame until their twilight years. Cezanne is an example of the latter, and the piece says this about him "The freshness, exuberance, and energy of youth did little for Cézanne."


I think people...especially Americans...put entirely too much value on youth. At the wise, old age of 31, I've learned that as an adult, fun must be seriously pursued. Maybe that’s what’s so special and so deceptive about youth. When you’re young, fun and a lack of responsibility become synonymous. We're conditioned to believe that fun should just fall into our laps at random, and it frequently does. But does that mean that we must choose between building lives that are structured purely for fun and ones that leave us in a desert devoid of all pleasure? Maybe for some people, fun is all around us, just begging to be picked by any random passer by that hasn't breathed too many breaths. For others though, that may have never been deceived into thinking that fun and responsibility were mutually exclusive. They may just know that it's something that builds as we build it, that grows as we invest in it.

"Fun, must be seriously pursued!" Such a great quote, Megan

One of the many highlights of my week is Friday afternoons when I get to spend a couple off hours inthe company of my 15 year old brother rolling around the mat, listening to him talk about what he sees as interesting and important in the world.

Liam...they are so interesting! The way they see things is this strange blend between adult and child. I think the BJJ ones are special though.

I've often thought about the same thing...how much freedom there is in youth, but how much true enjoyment can come from age and wisdom. I enjoy things so much more as an adult because I appreciate them more. But I also think teenagers are interesting because of that unique blend of adult and child. It's tempting to try and offer "advice" to them but the truth is life must be experienced.