Maslow and BJJ dropouts...who's most likely to hang around?

I was participating in a discussion on a jiu jitsu forum about BJJ dropouts. It turned to a question of who's most likely to continue training and an instructor suggested that two groups are most likely to push through the pain longer...those looking for self-actualization (level 5...more likely to have lives stable enough to commit long periods of study) and those looking to do it as a job (level 2...survival motivation). 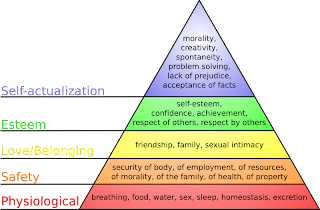 As an activity, BJJ has the potential to satisfy all the highest four levels. I would guess that those on level two though, are more likely to quit because of pure economic forces...it's crazy difficult to make money and even to sustain as a training period to eventually make money from. Basically I don't know if BJJ is best suited to get them what they're looking for (not saying it's not worth the effort, it's just a very difficult path). Level 5 though, I think it's very well suited to achieve needs for creativity, spontaneity, problem solving, lack of prejudice, acceptance of facts and thankfully, provides an environment that supports morality.

I think jiu jitsu falls under level 5 for me (which actually explains my current apathy over competition and belts.) So what level are you and who do you see staying the longest at your club?

It satisfies the top 3 for me. The ones who stay the longest are the ones who play the game by their own rules. This is such a great post Megan, you've inspired me :)

I agree--great post. BJJ satisfies the top 4 tiers for me. But I think I've stuck around for Tier 5. Just before reading this post I was reflecting on my own posts and how they mostly deal with issues of personal growth. I don't think I would like it so much if it were only physically challenging.