In love with Armbars

Ok...just figuratively. I'm still terrible at them. I just got back from a few days in California (funtastic!). The 8hrs travel time gave me a chance to spend some quality time with The Guard. I'm amazed at how much sense it makes now. A few months ago and it (along with Jiu Jitsu University) may as well have been War and Peace in its untranslated version.

There are just...so many ways to hyper-extend somebody's elbow! I remember the first arm bar I learned that wasn't from the guard. It left me with so many questions. Can I really brace a wrist using my neck?  Why do you push directly on the joint from some positions but use more of a twisting motion from others? Is twisting a form of hyper-extension? Do these moves change at all for different genders since women's radius hits the elbow at a different angle?

On a side note, the lady sitting next to me on the plane saw what I was reading and assumed I was studying medicine. I wondered what happens when she goes to the doctor. 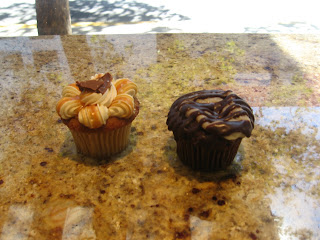 Tomorrow's going to be rough. I'm a foodie and anytime I go on vacation...well...unless it's Japan (which has almost no food I'm interested in save some seafood) I come back stuffed to the gills with food experiences. Couple that with the fact that Chinese food is my absolute favorite on the planet (it barely feels foreign to me) and I ended up with a heavy and wonderful list of new food experiences...here's a brief recap of highlights:

Xiao Long Bao: The most perfect food ever invented. Better known as soup dumplings. I'd order it as a last meal. It's hard to get decent ones in Florida and Cali has some really good ones.

Pho: Vietnamese beef soup. Clean and light. Not really into Viet cuisine, but still a favorite of mine.

Doughnuts: Also something we have a lack of down here. Went to a place called Stan's. Had the glazed, sourdough and chocolate covered cake. Yeah...I know. Doughnut hedonism.

Custard Tart: Had some great ones in Chinatown

Dumplings: Chicken, shrimp and pork at Tong Dumpling Pot. They had me sold once I saw the wrappers being rolled out by hand up front.

Green onion cakes: Had two versions of these. The dumpling place beat the Xiao Long Bao place hands down.

Cupcakes: Love's cupcakes. You need to go. The woman does an amazing job at flavor balance.

Fortune cookies: From one of the oldest fortune cookie factories in the US. More like waffle cones than the twisted styrofoam you get at most Chinese places.

So yeah...I'm totally going to pay tomorrow, but it was worth it.

Hi. How does The Guard compare to Jiu Jitsu University? JJU is head and shoulders better than any other BJJ book I've seen, but I'm interested in getting Vol.3 Strategic Guard. I've been doing BJJ for 3.5 years. Thanks.

Pho is really Vietnamese fast food. You should really try to find a place that will serve you a family style vietnamese dinner. It is heavenly. It also takes forever to prepare, which must be why the one place other than a private home I ate a meal like that went under. But I rate it even higher than my other favorite, French.

Will have to add The Guard to my wish list. I've spent a lot of time in JJU these past five months. Just when I think I've moved beyond survival, I look back and realize I'm missing one or more details that have been getting me in trouble. But...I have to say...Saulo's Revolution Series 1 DVD box set is changing everything!

@Anonymous-I wouldn't really try to compare them since the core focus is so different. JJU walks you through lists of techniques that "should" be understood at each belt level. The Guard addresses situations that occur in one position. There's little focus on submissions and it's really written from mor of a "what do when..." perspective. I'm finding it very useful in knowing how to react to to weird positions I tend to get myself into. I just received my copy of volume 1, which I'm beyond excited about.

@G-stamp...I love JJU for that. I find myself going back to the very first page on occasion.

I've heard great things about that box set. I've been doing more books than DVDs (I only have Roy Dean's BlueBelt Reqs) but I'm thinking of moving into DVD territory.

Megan, Thanks. I'm pretty sure I'll get Vol.3. I've never used instructional DVD's so I can't speak to that. I think my class instruction is adequate in that regard. I use books to solve those "what to do when. ." questions. I'm planning to buy a DVD set of a past Pan-Am tournament because I think watching people sparring/competing helps answer those questions, too. I only wish they included more footage of purple belt matches. Black belt matches are probably on too high a level to help me as much. --MC

Btw, Use the neck and shoulder to brace a wrist, or limb. Can't answer the other questions. -MC

@Anonymous...good idea on the PanAms. My school just switched schedules and while the new schedule works better for me, the old one gave me at least 20 min of watching higher belts spar. I really miss that. I learned so much just watching.

I got some good help on bracing the wrist with the neck in class last night. Still having a hard time applying pressure like that, but it's coming.

I LOVE the Ed Beneville Guard series (I only have volumes 1 and 3 right now, but hoping Santa will bring volume 2.) LOVE. I also have Saulo's book which is an equal favorite. And I love doughnuts, and the particular kind of dumpling known as 'potstickers.' Have you tried bahn mi (roast pork sammiches from Vietnam)?

...Thanks Georgette...now I have another food quest to drive me crazy:P