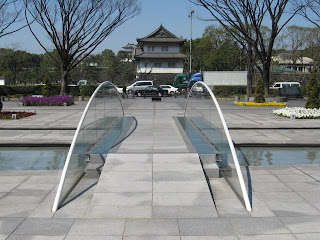 I was going through some old vacation photos last week and it hit me...I have ALL these pictures from me bopping around a couple continents...I should try to use them instead of poking around the internet, hoping to find pictures that are pertinent to my posts AND that I won't get in trouble for using. So today...I start. It's going to be a challenge to tie them in, but I figure with some crafty wording, I can pull it off in some abstract way each time. This one's from Tokyo, Japan, just outside the Imperial Palace.
Yesterday morning on the way to work, I passed a sign hitched to the back of a truck that looked like it was advertising a new BJJ school. I was going too fast yesterday (and today) and couldn't read the web address (which I swear was in 12 pt font). Anyway, having been filled with a solid fear of McDojoism from my tours around Sherdog and JiuJitsu Forums, I'm already suspect. South Florida's BJJ scene is probably second only to California's, and that's probably only because of the share of space given to MMA. I've been seeing Meetup groups, classes popping up at random gyms...I'm sure this is only the beginning.

I don't know why, maybe because it was some of my first serious work from the back, but learning the bow and arrow seems to have bridged some gaps in my jiu jitsu mind. Mostly control. Even though I've accepted that it needs to be done, and understand some theory, I still have yet to feel it. Something about the expanse of that choke...the controlling of knee, body and neck, gave me a lot of perspective. I don't know what it is, but it's the first submission I've learned that feels good for my body...doing it, not receiving:)
During the same lesson, our Muay Thai instructor pointed out that I was gripping the lapel too hard and pressing into the throat before the choke had even started. He said it during the instruction, but of course, I immediately forgot it. It reminded me of something our head instructor had told me a while back..."don't squeeze". Remembering to use just enough power so that you're controling/properly positioning yourself but still not wasting precious energy...that line is so fine.

My worries of missing a class are completely gone. I'm finally confident in my fledgling relationship with BJJ. It's a nice place to be.
Posted by Megan at 4:43 PM