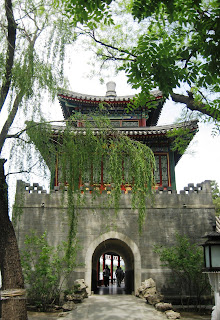 Knee pain's back. I've been loving my Ace hot/cold pack and had to make a choice last night. Being the China-enthusiast I am, I see a Chinese medicine doctor from time to time and one thing she's always said, is to put heat on joints, never ice. Same recommendation from another traditional Chinese med doctor friend. I went straight for heat last night and it's doing fine today. I'm wondering if there are any comparative studies out there of the two methods, since Western medicine immediately runs to ice on a  joint injury to reduce swelling.

I'm starting to have my first experiences with male white belts that never knew me as a white belt. The current guys that are lower ranking than I am knew be pre-promotion, so while there's definitely respect there, the relationship seems to be different. Well, last night, there were four newbies in class. So new they didn't even have gis. Boxers I believe. I sat down between one and a blue belt and he started talking...
His comments were a blur of telling me he doesn't bite, challenging me to a roll immediately, telling me how someone who I said was fast couldn't beat him if he used his hands, preaching to me about how tiredness is all in the mind, recommending breathing exercises to me...then, I'm assuming after realizing I wasn't too happy with what he was saying...telling me how long it should take to get a green belt and insisting the average was twice as long as it took me and telling me how much he respected that. At that point I started talking to the blue belt next to me and a couple minutes later, he left. I'm hoping that reaction is a rarity.
I managed to stay for the full 2 hrs last night, which meant I got to stay for the Ginastica Natural portion...funtastic! Alvaro Romano is coming in November and while I've never been able to make the Saturday classes, I'm considering stopping by to at least watch.

We were doing 7 min rounds last night and I realized I've reached a point where my concentration is fatiguing before my body. Hoping that's just a mark of my endurance improving and not my brain degrading.
Posted by Megan at 7:59 PM

I have wondered about the ice vs heat as well. Let me know if you find anything out! :)

Definitely...I've been trying to track down a doctor with degrees in both...they're not THAT rare, but I haven't run into any recently.