I don't end up in a lot of face-to-face meetings (thanks to today's, geo-nonspecific work environment), but every now and again, they do happen. Since I've been training, I've noticed a difference in how I handle non-physical confrontation with men--which is notable, since size is a big deal in any confrontation and I already have a good 4" (7" in heels) and 15lbs on your average office-dwelling American male. Between that, education and IQ, I don't shy away from arguments or confrontation based on gender.

The last time I had a slightly confrontational meeting with a man, I noticed something different. I spoke the same, maintained the same eye contact and vocal control...but...my physical presence was different. I started trading the same, subtle cues of physical intimidation that he was giving to me. It got me paying attention to how men and women behave in a conflict and women (most of us)...we throw words with more understated body language. Men though, there is more physical posturing...more leaning in with shoulders squared. Training has definitely changed how I respond physically to non-physical confrontations. 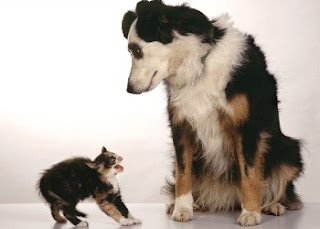 I say it's important to women because there are subtle (ok...not THAT subtle) cues men give each other in conflict situations. All too frequently I've seen women try to mimic the aggression of men by simply turning up traits of female aggression...speed of speech, volume, emotional reactions...all of which are gambles. Any of these gestures can easily be perceived by any gender as an indication of loss of control, which is a stereotype women in business already face.

I'm not saying that women should "fight" like men, but conflict is a constant in life with nuances that change based on culture, age, race, gender and who knows what else. Speaking someone else's language is always a  good thing.

Because when I show up on a radio call at work, I can assess the scene and KNOW I can handle myself.

I am going to stop typing now, because this is a subject I could ramble on about for days. Great post.

lol...What do you do if you don't mind my asking?

Absolutely! In one recent pseudo-conflict I even noticed that I instinctively stepped toward the person and pushed my shoulders back.

Of course, when we know this, we can also understand how to use our body language to de-escalate conflicts. We can step away from the person, etc. But remaining calm enough to make the decision about the proper "escape" is all jiu jitsu, baby! (And I'm still learning.)

I wrote about something similar here

I have noticed the same thing. Especially with me making eye contact. Before, when I was angry, I would look away from a person. Now I stare them down. lol