I SURVIVED THE BELT TEST!! 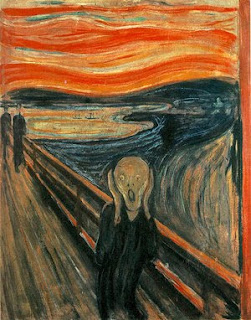 ...AND passed:)
Liam was right...it really was more celebration than examination. I got there an hour early, feeling silly for worrying about my arrival time. When I got inside, I saw a bunch of other white belts already on the mats by the boxing ring working on the test. The kids were still testing, and I'm glad I got to see it.
Honestly, I didn't do as well as I'd hoped. I had to go straight into a guard pass from a take down. It was sloppy, but the guard was passed and side control was achieved. I got through the sweep that was terrifying me fine and what tripped me up? My favorite, hook sweep. Funny how the two moves I worried about the least caused me the most issues. I had to do it twice, but not before Master DaMatta told me to stop, calm down and just focus on technique. I know from public speaking and performing that I have a tendency to rush when nervous, but I thought that this time, I'd be most intimidated by everybody watching me. Nope. As usual, that didn't phase me one bit. My problem was that I lost hold of myself. I let my breathing get out of control and my mind disconnect.
But it was great! I'm proud of myself in a way that I can't say I ever have been...especially when I look back to who I was when I started, proud of myself for just learning a drill. My belt represents such small gains in the world of jiu jitsu, but it's still a far cry from the newbie white belt I was six months ago...happies:)
It was great to get to sit and watch everybody else test too...all the nervousness and confidence. It was really a great experience. I realized today that I'm the underdog in class, which is way weird for me. It's definitely humbling, but also motivating. Instead of the belt gauntlet, we each got thrown after our belts were presented. I was nervous, but thankfully didn't have to fall too hard.
I got a lot of them, but three congratulations really jumped out at me and I don't want to forget them...
"Good job. It was really awesome seeing you here today Megan. You've come such a long way with the technique. Really awesome." (I gotta admit, it felt super snugly hearing this from Parrumpinha)
"Good job beautiful."
"I knew it from the beginning"
So yeah...I'm TOTALLY amped to prepare myself for blue belt, and I know that more than anything, I want to be a technique monster...so much so that I'm calm enough to demonstrate it during a test:)
Posted by Megan at 1:59 PM

Parabens! Well on the way to faixa azul!

Excellent stuff Megan. Well done and you should be proud of yourself.


So sweet that I get a mention too :)

Thanks Georgette and Steve!

Liam, the concept of what you said was so foreign to me that it really stuck. The whole event felt more like a graduation ceremoy...with a big final exam that everybody gets to watch.

Congratulations!! Awesome job!! Can't wait to see what the next six month bring you. :)

Thanks! I'm now sitting here wondering what I should work on next. Planning...it's half the battle.