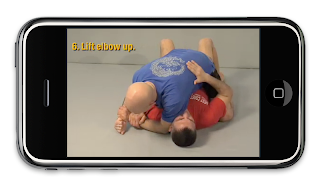 Heard a pop around my back tonight...I'm guessing it's nothing, but it's a little disconcerting. I iced it and besides my crackly shoulder, everything feels ok.
I've been playing around with a couple of the aps from GrappleArts and saw some nice results. (I love them btw) I applied three of the concepts that were demonstrated in the pinning ap tonight. My favorite was correcting the habit of crossing the legs when getting control of the back. The purple I was rolling with called me on it, and I immediately knew what he was saying. Had I not watched the video, it would have taken full on instruction. I'm finding that I don't really learn "moves". I learn core concepts and go from there. That's honestly how I learn everything. Seems to slow down the BJJ learning process, but we'll see.
It was a good night. I spent the first part of the night drilling with an injured blue. I worked on getting out of side control (again...it's my great nemesis), escaping the back (I tend to lean the wrong way when turning) and escaping back mount (more GrappleArts help). Rolling with new people is a funny thing. It's like a first dance or a first date...just way more opportunity for awkwardness. A new purple that I think used to train at the gym had been around. He asked me to roll, and then managed to work in mentioning his wife twice in 10 seconds of conversation. It makes me wonder what some of the guys have seen, or worry about.
It's been a weird couple of weeks. I haven't seen the ladies in what seems like forever. I know our brown's been out of the country. Haven't seen one of the blues for...months, the other blue I never saw too frequently and my fellow green's just been busy. Guess it's part of the cycle.
I was working with one of the blues tonight just working slowly through positions. I caught him in a triangle and heard a "sh**". I'm taking that to mean he was actually caught. Teehee. Afterward he looked at me and said "you're getting there...you're getting there...you're just not finishing. I have the same problem". I'll take that.
Posted by Megan at 7:37 PM

I love it when that happens! :)

That is fantastic Megan. The conquering will now continue.

2 points from a guy point of view:

1. About the only time guys get this sweety and close to a girl/woman less cloths are involved, also we worry if we grab something by accident are we going to be accused of doing it on purpose.
2. The mentioning of the wife was to remind little Petety not to re-act.
Inner monolog, "I'm married. I'm married. I'm married. This is just part of bjj. This doesn't mean anything."

I don't think it's to remind himself that he's married. The mentions seem to be designed to put the woman he's talking to more at ease - as in signaling "I'm not a pervert hitting on you. I'm married, I'm a purple belt and you seem like a good partner for a fun, safe roll. How about it?"

No offense to you Megan, but you do seem like you are extra-sensitive to that kinda stuff sometimes. It's not bad or good, it's just the way it is and it works for you. Keep having fun.

@Joshkie regarding #2...I totally took it as more of informing me that "hey, I'm not a freak that just wants to get close to you." It struck me because I wouldn't think that kind of reminder would have been necessary, but then, I don't know what kind of things the guys at the gym have run into with women training.

@Tree Frog...I agree on why the purple mentioned that he's married, especially since many women training have a history of negative experiences with men on a physical level.

No offense taken...I can actually guarantee that I'm not sensitive to that kind of thing...highly aware? Yes, but definitely not sensitive. It may seem that way though, because I do use that topic as a general point of emphasis for my blog. As you'll see from my other posts, I find the gender interactions in BJJ to be fascinating and a great topic for a publicly read blog.

Never discount your feelings. Tree Frog why twice was he worried that she was hard of hearing? You only mention something more than once if your worred about it. Why would he assume that she would think he was a pervert for asking to roll in a bjj dojo?

Sorry was setting her watching tv and not hitting enter and you posted. lol

If he was physicly atracted to you sometimes we dont have controll over what little petety does was all I was trying to say not that he was actualy thing about doing anything.

Totally understand what you were trying to say. I've rolled with men I knew were physically attracted before and know they waffle back and forth between being focused on BJJ and, well, not. I've had some situations pop up where I've had to call guys out and others where there were physical reactions going on...this guy...I didn't think he fell into either category to be honest.

You bring up an interesting point though. I never would have considered he was talking to himself and not to me.

Maybe sometimes we killing two birds with one stone by saying, "Hay I'm not a creep" and just a reminder put out there to keep it professionial. And to this guy specifacly go with what your gut tells you, and maybe I was just projecting what might go through my mind if we ever met, other than the married part.

I don't think I've ever been attracted to someone on the mats. When I'm rolling, it's business time and grappling takes up so much of my headspace that I don't have time to be attracted.

Amused, frustrated, focused, appreciative of the roll or tired, yes, but attraction's too tangential to get any headspace during that time - especially when the rolls go from higher belts to giant ex-NFL players to skilled or new men, women and kids of all shapes and sizes. The BJJ is too interesting to not pay attention to.

Perhaps that's why I'm reacting so negatively to Johskie's statements. It's not something I've ever thought about or dealt with.

Plus I never roll without wearing a cup. Shots down there hurt too much to go without. I don't understand why men would do that - especially against someone who plays as much butterfly or half butterfly as I do.

@Tree...in my short year of rolling I've never rolled with a guy that was wearing a cup. I train at an MMA school though, so maybe that's it.

Awesome job on the triangle, Megan! I still have trouble finishing a lot of submissions. That's why were still meager underlings. ;)

Also, I learn by concept too. I don't remember specific details all the time, which gets me into trouble sometimes. But learning the concepts means you can apply the details you DO actually remember in a lot of different places. Conceptual learners unite! lol

lol@A.D. I can't want until I've got more time under my belt and can talk about the pros and cons of being a conceptual learner.

I think learning by concepts will make you feel slower than alternatively-learning compatriots at the start, but your learning curve will shoot up at a greater rate than theirs (I think.) Kind of the difference between learning how to fish vs. being handed a fish. Or something.

I agree, the whole gender thing is fascinating. But after two years+ of grappling, I'm pretty convinced it's not nearly as big a deal as I thought it would be or as I thought it was. It merits analysis and thought but then eventually its depths are plumbed and I moved on. Continue, though, I think your thought process is interesting and worth reading.

Cups are illegal in IBJJF tournaments-- maybe wanna get used to rolling without. :)

Yeah...I've noticed now that I notice gender issues only when training with new guys that have never or aren't used to training with women. Though my school has women, I think I end up with the big guys a lot because of my size and they're not used to training directly women, though they are used to sharing mat space.