And the Matty goes to...

I had so much fun at NAGA!  I went to support and to check it out.I arrived at FAU and started texting and calling, trying to find my way to the ladies' competition area. As I was searching for my team, I looked to my right and saw a face that looked familiar. It was Allie! ...and Jennifer! I've never met anyone from blog-land before and it was really cool. It was great to see both these ladies in action after reading so much about their relationships with BJJ.

I gotta say...I'm thinking about competing now. Even just helping the ladies get ready was a blast. I honestly expected the rounds to be more intense than they were. My only concern now is being able to last the number of fights I might have to without passing out or vomiting. 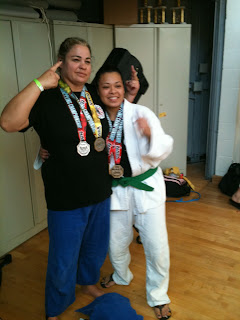 A few moments really stuck out to me though. Specifically for their softness. A year in and the contrast of the softness of the personalities and interactions and the hardness of the sport STILL get to me.

Happiest moment: One of the first things I noticed was how happy the fathers and husbands were. I mean beaming from ear to ear, toting around kids, helping wives and girlfriends with their gis. I honestly can't say I've seen that anywhere else. I get it though. Where else in life do men get to bring their families AND participate in/watch something so man-tastic? 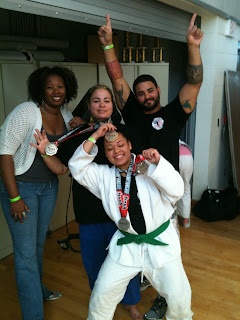 Most insightful moment: Later I was sitting a few people down from Parrumpha, waiting to start videoing one of my teammate's rounds. A guy came up and sat down and started discussing the reasons he got into BJJ...specifically because he finds the lifestyle so much more peaceful than others he could have chosen. From what I've experienced, I'm guessing he's right.

Most hardcore moment of the day: There was a lady breast-feeding between competition rounds. She almost missed a round because her husband was fighting and she didn't have anyone else to watch her child. That's hardcore.

Cutest moment of the day: A lady was up competing and had gotten caught on the bottom. All of a sudden I heard her seven year old son's pre-pubescent voice burst across the mats "You can do this, Mom! You can do this!" 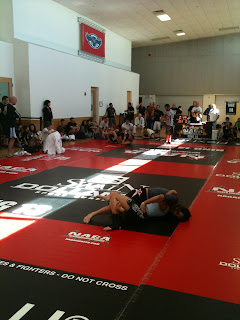 Most touching moment of the day: I love any situation where cultures and ages and lifestyles are mixed up and people are broken down to their core elements. One of my teammates had a difficult round and was taking it pretty badly. We were sitting and talking to her, and I took a quick look at what was going on. Ages ranging from 10 to 41, bounty hunter, professional, firefighter, student, Black, White, Mexican, male, female...all sitting together trying to boost the spirits of someone else. The quickness with which the kids and teens run to support a discouraged adult touches me the most. I can't name one other place I've ever seen any of this happen...ever.

So yeah...the competition question is still up in the air for me, but after seeing one up close, I'm kinda excited about the prospect.

This post is going to make me cry. I love the humanness of it all, especially the child rooting for his mom to win. That right there breaks so many social barriers expected for women, children, mother and child relationships and social expectations.

I hope you do compete but I don't want you to get hurt. LOL.

This is a great post...love the photographs.

Awwwww, that was adorable about the 7-YO.... altho if I had been Mom, I would have started laughing so hard that I would've had to forfeit the match.

Megan, again, it was a true pleasure to meet you! I was just getting ready to sit down and write a similar heartfelt recap of the weekend. That new mom had me in awe - she's competing 6 months after childbirth! Wow!

@Trudy...I know...it was cute at the time, but it made me tear up later it was so sweet. I think BJJ breaks down a lot of external AND internal barriers. Just a year in and I see why people have such an intimate relationship with it.

@Savage...I think I might have started bawling right there on the mat and gone over to hug him.

@Jennifer...I can't wait to read what your weekend was like with training and competing. Did your kids compete today?

Wowza -- and I thought I liked the last post! This is one of the best tournament posts I have read. You paint a beautiful picture of our sport. So many insightful comments and inspiring situations. I love it.

You want to compete! I can tell! Just do it, girl. You will not regret it. You have absolutely nothing to lose and everything to gain.

I have read in some of your other posts (as far as I understand) that you are hesitant because there would be pressure to train, so to speak. It's true; the training is different. I recently struggled with that feeling leading up to my first tournament. I wasn't able to be as leisurely about BJJ, and sometimes I didn't like that feeling. But mostly it was a good thing. (I actually blogged about what I liked about competition training here.) In my opinion, it is very possible to feel a lot of pressure to train like crazy and compete well, but in all fairness, as non-professionals, that only comes from within. So you just have to check yourself if it's getting too stressful; competition training should be fun, just like regular training.

For a nice way to look at your first tournament, I recommend thinking about it as Dev suggested on my post about wanting to compete for the first time.

Overall, you might feel moments of stress during the pre-comp stages, but that will in no way compare to your sense of accomplishment and the lessons you learn from the whole experience.

Do it! Do it a lot. You will find that it adds a whole new dimension or two to this gorgeous sport. :)